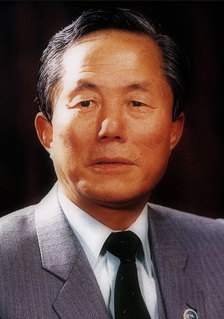 Choi Hong Hi (9 November 1918 – 15 June 2002), also known as General Choi, was a South Korean army general and martial artist who is a controversial figure in the history of the Korean martial art of Taekwon-Do. Choi is regarded by many as the 'Founder of Taekwon-Do'—most often by International Taekwon-Do Federation (ITF) organizations.

Others, such as World Taekwon-Do Federation (WTF) organizations, portray Choi as either an unimportant or a dishonorable figure in Taekwon-Do history, whether by omitting him from their versions of Taekwon-Do history or through explicit statements.

The oldest Korean martial art was an amalgamation of unarmed combat styles developed by the three rival Korean Kingdoms of Goguryeo, Silla, and Baekje, where young men were trained in unarmed combat techniques to develop strength, speed, and survival skills. The most popular of these techniques was subak, with taekkyeon being the most popular of the segments of subak. Those who demonstrated strong natural aptitude were selected as trainees in the new special warrior corps, called the Hwarang. It was believed that young men with a talent for the liberal arts may have the grace to become competent warriors. These warriors were instructed in academics as well as martial arts, learning philosophy, history, a code of ethics, and equestrian sports. Their military training included an extensive weapons program involving swordsmanship and archery, both on horseback and on foot, as well as lessons in military tactics and unarmed combat using subak. Although subak was a leg-oriented art in Goguryeo, Silla's influence added hand techniques to the practice of subak.

During this time a few select Silla warriors were given training in taekkyeon by the early masters from Koguryo. These warriors then became known as the Hwarang. The Hwarang set up a military academy for the sons of royalty in Silla called Hwarang-do, which means "the way of flowering manhood." The Hwarang studied taekkyeon, history, Confucian philosophy, ethics, Buddhist morality, social skills and military tactics. The guiding principles of the Hwarang warriors were based on Won Gwang's five codes of human conduct and included loyalty, filial duty, trustworthiness, valor and justice. Taekkyeon was spread throughout Korea because the Hwarang traveled all around the peninsula to learn about the other regions and people.

In spite of Korea's rich history of ancient and traditional martial arts, Korean martial arts faded into obscurity during the Joseon Dynasty. Korean society became highly centralized under Korean Confucianism and martial arts were poorly regarded in a society whose ideals were epitomized by its scholar-kings. Formal practices of traditional martial arts such as subak and taekkyeon were reserved for sanctioned military uses. Civilian folk practice of taekkyeon persisted into the 19th century.

In 1952, at the height of the Korean War, there was a martial arts exhibition in which the kwans displayed their skills. In one demonstration, Nam Tae Hi smashed 13 roof tiles with a punch. Following this demonstration, South Korean President Syngman Rhee instructed Choi Hong Hi to introduce the martial arts to the Korean army. By the mid-1950s, nine kwans had emerged. Syngman Rhee ordered that the various schools unify under a single system. The name "Taekwon-Do" was submitted by either Choi Hong Hi (of the Oh Do Kwan) or Song Duk Son (of the Chung Do Kwan), and was accepted on April 11, 1955. As it stands today, the nine kwans are the founders of taekwondo, [26] though not all the kwans used the name. The Korea Taekwon-Do Association (KTA) was formed in 1959/1961 to facilitate the unification.

In the early 1960s, Taekwon-Do made its début worldwide with assignment of the original masters of Taekwon-Do to various countries. Standardization efforts in South Korea stalled, as the kwans continued to teach differing styles. Another request from the Korean government for unification resulted in the formation of the Korea Tae Soo Do Association, which changed its name back to the Korea Taekwon-Do Association in 1965 following a change of leadership. The International Taekwon-Do Federation was founded in 1966, followed by World Taekwon-Do Federation in 1973.

One source has estimated that as of 2009, Taekwon-Do was practiced in 123 countries, with over 30 million practitioners and 3 million individuals with black belts throughout the world.[citation needed] The South Korean government in the same year published an estimate of 70 million practitioners in 190 countries.
Back to Top of Page
| home | about | programs | n.w. location | s.e. location | instructors | contact | photos | pattern videos | fees |
| self-defence videos | benefits of taekwon-do | history of taekwon-do | grading | tenets & student oath | FAQ's |